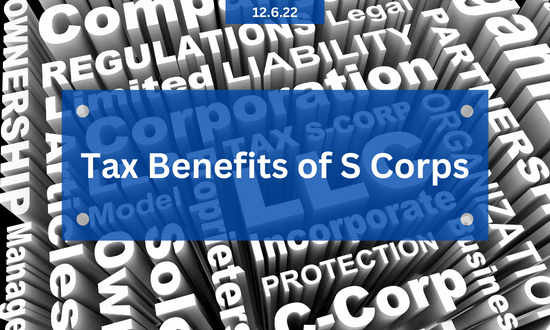 S Corps, also known as S corporations, is an IRS election made by corporations or LLCs (limited liability companies) that governs the way these entities are taxed by IRS (and often time State) tax authorities. They are named after Subchapter S of the Internal Revenue Code, which outlines the rules and regulations governing these types of companies. Unlike traditional corporations, S Corps have certain tax advantages that can make them a more attractive option for small businesses.

In comparison, an S Corp with the same $100,000 in profits would only be taxed at the individual level. The profits would be passed through to the shareholders and reported on their personal tax returns. Depending on their individual tax rates, this could result in a tax bill of up to 37%. However, because the profits were only taxed once at the individual level, the shareholders would end up with a higher amount of after-tax profits compared to the traditional corporation.

Since the tax savings are dependent on the level of salary that the owner earns from the S Corp, the IRS requires a reasonable salary to be paid. It’s best to document this salary annually to justify the wages paid to the owner. We’ve seen some clients save thousands of dollars in Social Security and Medicare taxes by employing this strategy.

Another advantage of S Corps is the ability to elect into state level Pass Through Entity Taxes (PTET). Since 2018, many taxpayers have been limited to deducting no more than $10,000 in state & local taxes as itemized deductions. At last count, about 30 states have created a PTET as a workaround for the 2018 tax law changes. The PTET allows you to shift the burden of state taxes based on business income to the S Corp which allows you to receive a full deduction. This can be a powerful tax savings opportunity. Each state has implemented the rules differently however, so it is important to review state limitations before opting in to this entity level tax.

Overall, the tax benefits of S Corps can be significant for small businesses and can result in more after-tax profits for the business and its shareholders. 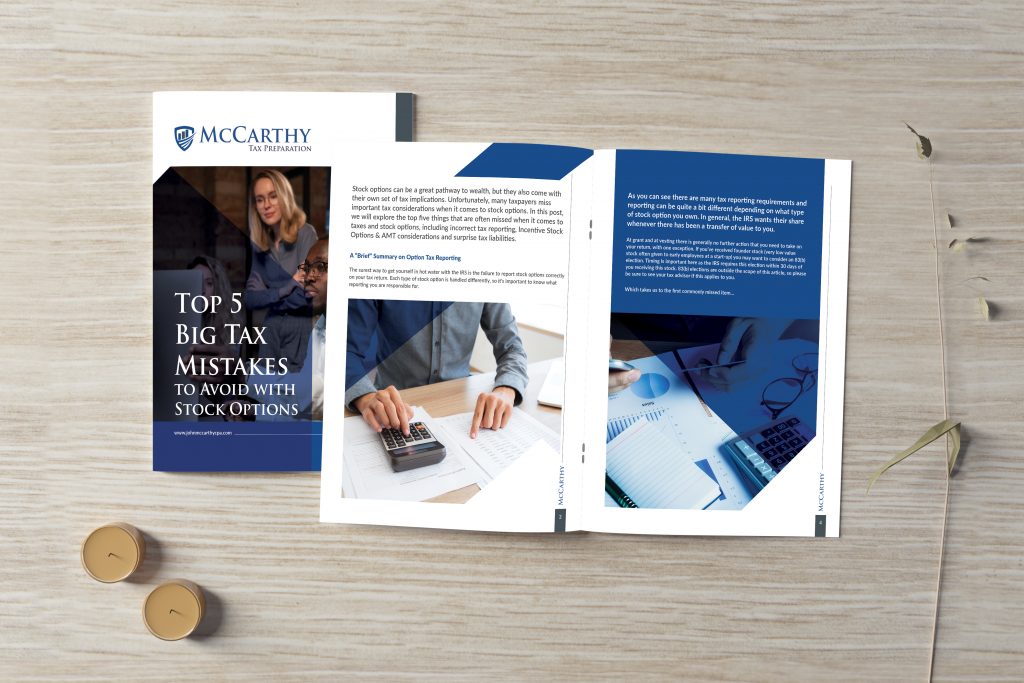 Sara has a Bachelor of Science in Technical Management Specializing in Accounting which she completed through DeVry University. Her love for numbers brought her back to finish her degree and join the public accounting world in 2017. Quickly Sara appreciated the value in helping businesses to make sense of their operations so they can make informed decisions for the future of their business.

When not working, Sara enjoys spending time with her three kids. They love to spend any time they can boating and camping.

Paula graduated from North Central College with a bachelor’s degree in accounting and became a CPA the same year. While working for a small accounting and tax firm in Chicago, she finished her Master of Science in Taxation from DePaul University. She has worked as an accountant and tax consultant for over 25 years for a number of companies mainly World Book Encyclopedia, Grant Thornton, Chiquita Brands and Jackson Hewitt. She and her husband enjoy traveling, especially to see their oldest son in the Navy and their youngest son play travel baseball.

Erika is an Accountant with over 4 years experience. Having obtained her bachelor’s degree in 2012 and her master’s degree in 2015, Erika has gained experience in accounting that has shaped her into the hard working team player that she is today.

Erika has always been described as a very detailed and analytical worker. Her love of numbers and her ‘get it done’ personality make her someone who will put in the extra time to accurately complete any given task. She loves providing quality bookkeeping support and also helping clients understand the details of their financial picture.

She understands that not all clients are the same and that individualized interaction makes for a better client-accountant relationship.

Outside of the accounting world, Erika enjoys, cooking, traveling and music. With the privilege of being a classically trained pianist and having taught piano throughout her college years, Erika holds a special place in her heart for classical music and loves to listen to her favorite composers, Rachmaninov and Chopin every chance she gets.

While working on her master’s degree, she began assisting small business clients with their accounting, tax compliance and tax resolution. Through this she gained invaluable experience and exposure to a variety of industries.

Professionally, Amelia enjoys working with technology and staying up to date with taxes. She embraces the demands to expand her tax knowledge through research and continuing education. She is passionate about helping her clients understand and take control of their unique tax situations.

Outside of work, Amelia enjoys cooking, painting, playing the piano, and spending time with her husband and two children.

Amber is an accountant with 8 years of experience in public accounting. She has worked on both accounting and tax needs for a variety of client types including individuals, small businesses and non-profit organizations.

She enjoys interacting with clients to understand their unique situation to ultimately give guidance that will have long term benefits.

Outside of work, Amber enjoys traveling, specifically road trips, going to the beach whenever weather allows for it, and dining out with friends and family.

Kim is a CPA with more than 20 years of experience in public accounting. She graduated from the University of Wyoming, took time off for family, then later obtained her CPA license from the State of Wyoming in 2000. She is active in the Wyoming Society of CPA’s and a member of the AICPA.

Kim has found the most rewarding part of her career to be getting to know her clients and helping them to plan for the ever-changing tax environment. She specializes in small business and affiliated individual returns, but has also taught Quickbooks classes and given tax seminars. Her years of tax experience have allowed her to gain experience in many different fields including professional services, skilled labor, agriculture, natural resources and high income individual returns to name a few.

Kim lives with her husband of 29 years on the family ranch in Central Wyoming. She enjoys photography, running, hiking, horseback riding, spending time with her family and reading a really good book.

Andrea has a CPA license and has spent most of her career working in the accounting and finance fields. She graduated from Dakota State University with a Bachelor of Science in Accounting and a Bachelor of Business Administration in Finance.

While accountants don’t generally tend to have a creative side, she’s an exception. Andrea owns a little home bakery that specializes in themed sugar cookies. You name it, she’s probably decorated it!  When Andrea is not working or baking and decorating cookies, she is spending time with her husband Dean and a very spoiled Chiweenie named Chloe. They have two grown children and two granddaughters. In their spare time, Andrea and Dean love to travel the US and world.

Her favorite quote: Be a cupcake in a batch of muffins!

Brandi has worked as an Administrative Assistant for over 20 years. She has worked in the accounting field, as well as manufacturing and distributing. She brings a multitude of experience in different fields as well.

Brandi has been married to her best friend, Scott, for the last 20 something years. She has 2 wonderful boys who keep her on her toes with all of their activities. Her love for her family and friends is her driving motivation. Her favorite quote is one her dad is always saying “Adapt, Improvise and Overcome.”

John is the founder of McCarthy Tax Preparation and a CPA with a background in public accounting and income tax. He’s helped numerous individuals, families and small businesses with income taxes and planning for the past 15+ years. He is also a member of the AICPA, Ohio Society of CPAs, and a past member of XY Planning Network, a leading organization of fee-only financial advisors who specialize in helping members of Gen X and Gen Y. John graduated from Purdue University in 1998 with a Bachelor of Science in Accounting.

A self described “money nerd” John enjoys listening to personal finance podcasts and reading tax code and IRS instructions. When he’s not thinking about CPA stuff, he likes to spend time hiking with his family at the Cincinnati Nature Center and volunteering at the local CSA (Community Supported Agriculture), Earth Shares CSA.

Raising their family of homeschooled kids has been the focus and joy for John and his wife Sarah. McCarthy Tax Preparation was created to better serve families. By running a home-based, virtual business, they can be closer to home and share in their children’s learning and development. It is exciting to watch them grow and learn something new every day!

Mary is a CPA who has been working in public accounting since 2010. After graduating from Mount Marty College with her bachelor’s degrees in Accounting and Business Administration, she began working with clients for all of their tax preparation needs. She is a member of the South Dakota CPA Society.

Staying on top of ever-changing tax law is a challenge Mary embraces. Using her knowledge and experience to help clients understand how their decisions impact the big picture is one of the things Mary enjoys most about her career. She also enjoys the challenge of handling the logistics of the firm.

When she’s not working, Mary and her husband Curtis keep busy with their three children. They enjoy traveling the country in their RV.

Leo has been a tax accountant for more than 12 years. His background includes high net worth individuals, real estate, construction and small businesses. Leo graduated from Pace University’s Lublin School of Business in 2009 with a bachelor’s degree in accounting.

In his free time, he enjoys spending time with his wife and two boys, exercising, trapshooting, reading, hiking and soaking in the sun at the beach.

Denise Carnes has been a CPA for over 15 years. She specializes in small business accounting and taxes for individuals as well as corporations and S corporations. Denise graduated from Southern Illinois University Carbondale with a bachelor’s degree in finance and accounting. She is passionate about partnering with her clients to provide them with the best opportunities to not only meet their financial goals but also use the best tax saving strategies to minimize tax liability.

In her spare time, Denise enjoys spending time with her husband and two children playing board games and tennis. She also loves to travel.

Matt is an Enrolled Agent with more than 10 years of experience in public accounting. He graduated from Excelsior College in 2007 with a bachelor’s degree in accounting, and initially started his career with the Internal Revenue Service as a Revenue Agent. In June 2008, Matt moved to public accounting with a concentration in tax preparation and consulting.

His background includes high net worth individuals, medical, manufacturing and construction small businesses, not-for-profits, partnerships, S-Corps, property and casualty insurance, and Foreign Compliance reporting for both stateside residents and US Expats.
In his free time, he likes to spend time camping, hiking, exercising, cooking and traveling. His newest favorite activities include both scuba diving and skydiving.

If you would like to receive periodical emails from me with more great content to help you acheive your financial goals, please subscribe to my free newsletter.